Languages, eh; who would have thought that in the 21st Century there would still be so much diversity?

In Westeros, in the world of George R. R. Martin’s epic Game of Thrones, there are spoken only two major languages – the Old Tongue and the Common Tongue. But what about computer languages?

If there were computer programmers in the Known World of Martin’s imagination, you might expect them to have settled on a single, common language. After all, it’s not as if he had a simplistic scheme of plot lines and time to spare on such detail.

In the Real World, there is a plethora of programming languages. The variety is more akin to Martin’s fictional Essos, where there are many languages, including Dothraki, High and Low Valyrian, and the independent languages of each of the Nine Free Cities.

So the choice facing developers and coders is quite frightening. Ok, not as scary as the sight of Drogon on an Immelmann turn after singeing your hair. But you get the picture?

I recently read an article on the popularity of programming languages. It’s the time of year when polls are conducted. The equivalent of the news media’s silly season – when there’s not much else happening. But just like Cersei’s outlook in Game of Thrones – she’s not in a popularity contest – it’s all a matter of perspective.

The IEEE Spectrum Ranking is perhaps the most comprehensive measure of relative popularity. That system synthesises 12 metrics from 10 sources to arrive at its overall ranking. The sources cover contexts that include search engine results, social chatter, collaborative sites, forums, open-source code production, and job postings. To give it added credibility, its top results are more or less consistent with other, well known programming language surveys, such as the TIOBE Index and the Redmonk Rankings. 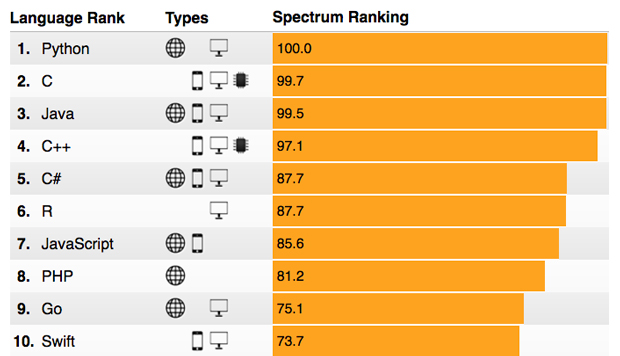 Amongst web developers and enterprise application developers, the top-5 are, in order: Python; C; Java; C++; and C#, with the top-4 well ahead of the rest, on a scale presenting the top language at 100 ‘points’. That suggests those languages are firmly established in the programming firmament, and no accident that Aculab Cloud offers APIs in those languages.

When the default ranking criterion are switched to focus on jobs, the top-5 changes to: Java; C; Python; C++; and JavaScript. That is surely evidence that job vacancies exist for coders with those languages in their armoury. If vacancies exist, people are in demand. If people are in demand, it’s because they don’t exist i.e., they are sought after in the marketplace, because there is an element of scarcity.

However, the most interesting aspect of all that, for a technology vendor such as Aculab, is that C remains a popular, in-demand language. And that’s the case, not only from the point of view of developers. Employers need coders with C programming language skills.

One benefit of C is that it is used to write software where speed and flexibility are important, such as in embedded systems or for applications where high-performance, telecommunications signal processing is needed.

We’ve been conditioned to think that C is on the way out, has been for some time, and that Microsoft-centric coders naturally would migrate to C++ and C#. Those with a preference for Linux and open source would lean towards Python and Java, from a top-5 viewpoint anyhow.

The good news for anyone embarking on a project to migrate to Aculab’s Prosody S from Prosody X hardware, is that its C APIs are just as popular as ever. Maybe not as popular as Game of Thrones, but hey, that’s no contest.