Phact was commissioned by an Italian telecoms operator to modernise its IVR platform, which was outmoded and incapable of being adapted to accommodate the desired innovation for delivery of new services.

The existing platform had been successively developed over decades, with an investment of many tens of thousands of man-hours resulting in a significant script code-base. As that code was integral to the operational flow of the existing IVR, it was stipulated that the code had to be reused as much as possible.

There were several motivational factors behind such a decision, including the complexity of the existing system, the loss of knowledge due to personnel changes, both internally and externally, the fact that the script code was undocumented, and the inability of the original supplier to continue to provide support and maintenance.

Click the image below to read the full case study. 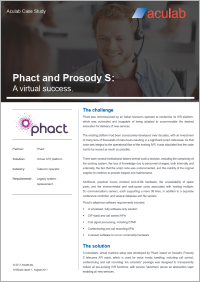